You would easily assume the best place to experience Spanish culture is the capital Madrid, or even Barcelona with its fanciful art nouveau architecture. I thought the same, until I visited Valencia, Spain’s third largest city.

Valencia is the birthplace of the iconic Spanish rice dish, paella; it was once Spain’s wealthiest city thanks to its position at the end of the Silk Road; and its historic cathedral houses the infamous Holy Grail.

Yep, Valencia is the city to visit if you’re after a massive cultural download.

Or want to live forever.

With the help of a few knowledgeable tour guides, I sampled Valencia’s best wine and paella; shopped for authentic, locally made souvenirs; and delved into the city’s motley history, uncovering the real stories behind the Holy Grail and the role of silk in Valencia’s glorious golden century.

After a lot of blood, sweat, tears, and grail-sipping, I found the 6 best tours in Valencia that will give you a grasp on authentic Spanish culture.

Try them out on your next visit to Spain.

Note: most small group tours in Valencia run in English and Spanish. Tours are split into two groups if there’s enough people, otherwise, the guide explains content in English then repeats in Spanish. If you can’t understand either, I don’t know how you’re reading this article. But you can try anyway.

For a quieter tour with a private guide all to yourself, you can’t go past a Withlocals tour in Valencia. I was hungry for nature and world-class paella, so booked a 5-hour Day Trip to Albufera National Park, with local guide, Marcos.

Marcos picked us up from our Airbnb apartment and set off to Albufera, the largest lake in Spain, primarily used for fish farming and rice production. Along the way, Marcos explained the region’s history and current fish and rice farming practices.

Paella fact: Traditional Valencian paella is served with chicken, venison, and rabbit. Seafood paella was only invented for tourists!

We made a few stops to admire the silky-smooth lake, colourful rice fields, small church, and bushlands leading to the ocean. For a closer look, we visited a local fishing village where 4th generation fish-farmer, Rosa, took us for a 30-minute boat cruise around the lake. The experience was incredibly peaceful and relaxing, with colourful dragonflies gliding just above the water and shy birdlife feeding in the tall reeds. 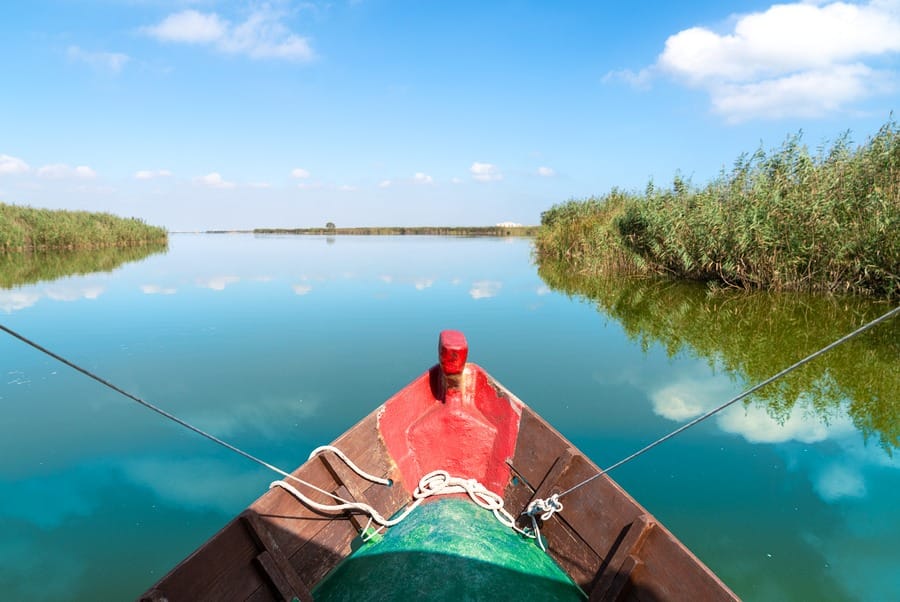 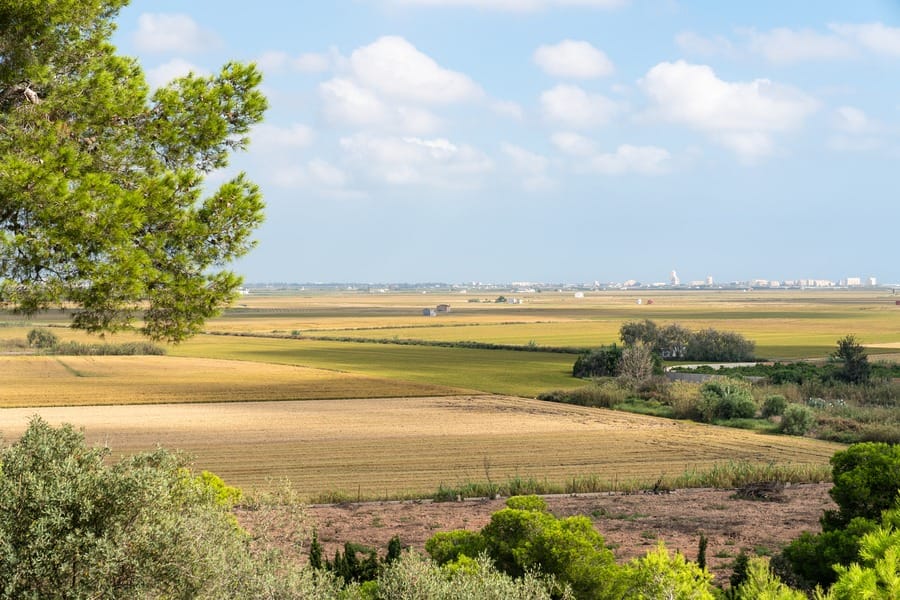 For lunch, Marcos took us to Restaurante Bon Aire, the 2018 winner of the International Paella Contest, where he helped us order Valencian salad and vegetable paella, then left us to enjoy our lunch. It was pretty remarkable sitting out on the terrace, eating the best paella I’ve ever tasted while overlooking the rice fields where it was grown. I spent the rest of my time in Valencia trying to find a paella as good, but none came close! 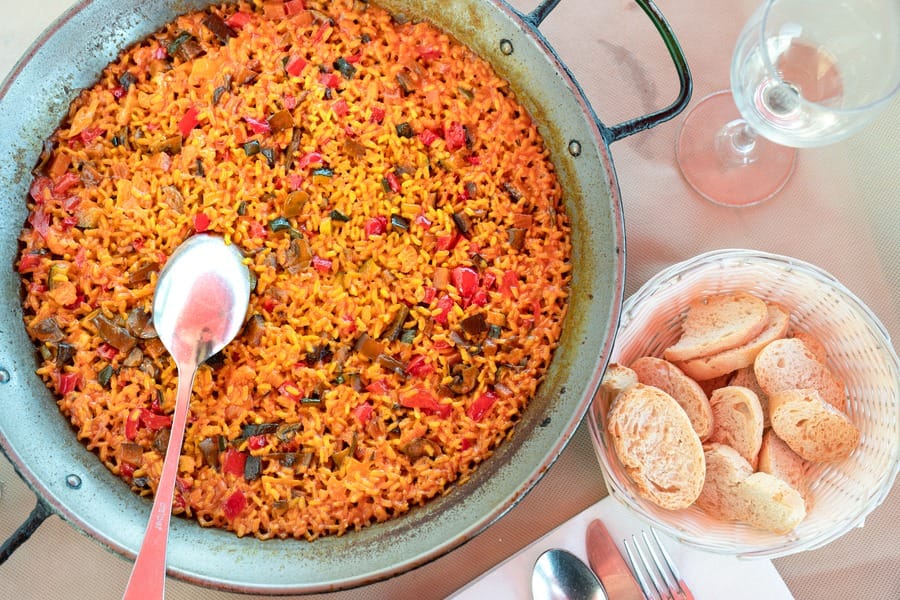 The tour price includes lunch and the boat ride

2. Walking Tour of the Old Town

To get a feel for Valencia’s enthralling history that dates back to the Roman era and includes 500 years under Arab rule, I booked a 2.5-hour Guided Tour of the Old Town.

We met our small group and guide, Alejandro, outside City Hall and started with a quick history recap on the city. We then walked to Central Market, the largest indoor fresh produce market in Europe with over 500 stores, where we tasted Valencia’s signature drink, orxata (horchata), paired with long sweet bread-like pastries called fartons, and watched locals go about their weekly shopping. 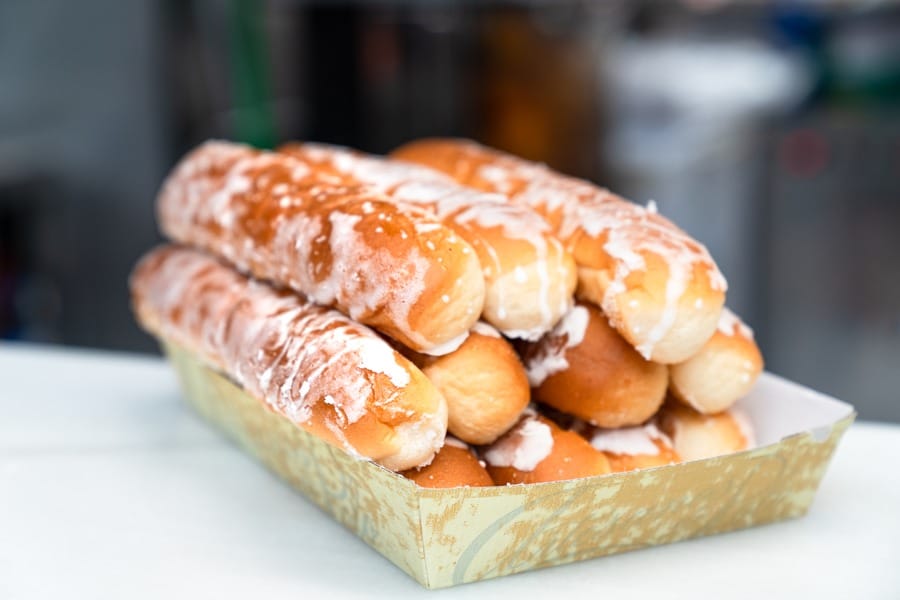 Farton – it means ‘fat’ in Valencian. Take a guess why

Other stops included La Lonja de la Seda, or “the Silk Exchange”, an exquisite 15th century building that served as the chamber of commerce of the time; Valencia Cathedral’s exterior, where Alejandro pointed out 3 styles of architecture – gothic, baroque, and romanesque; and Valencia’s oldest church, San Juan del Hospital Church, where we gawked at the city’s only medieval church paintings and ruins of an ancient Roman circus. 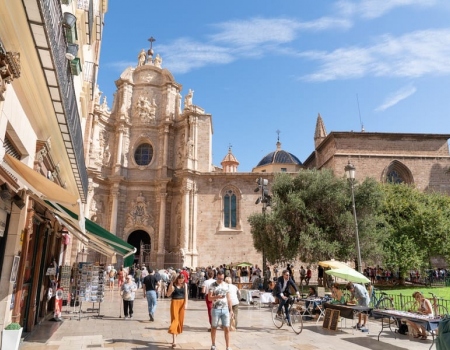 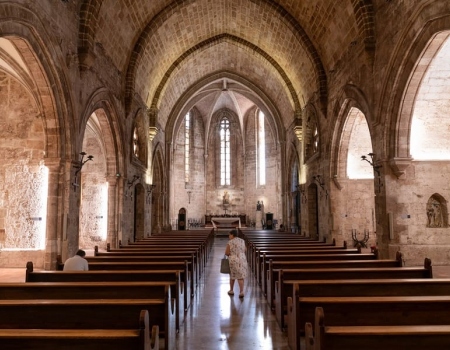 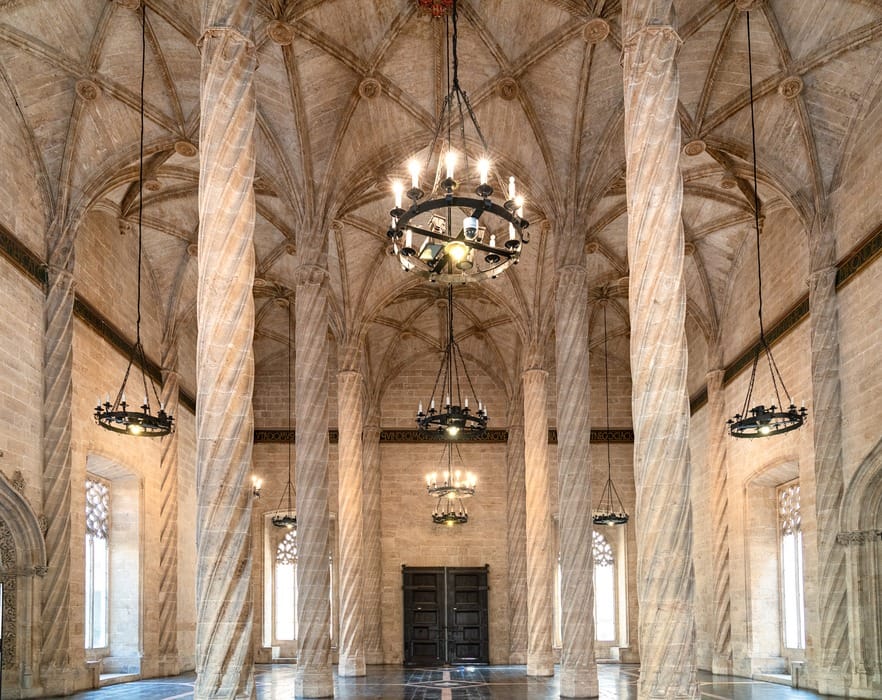 3. Made in Valencia Shopping Tour

If you like to buy authentic, locally made souvenirs and gifts, try the brand new 2-hour Shopping Route Tour. Our guide, Denizia, took us to 4 traditional Valencian stores selling silk, hats, chocolate, and fans. 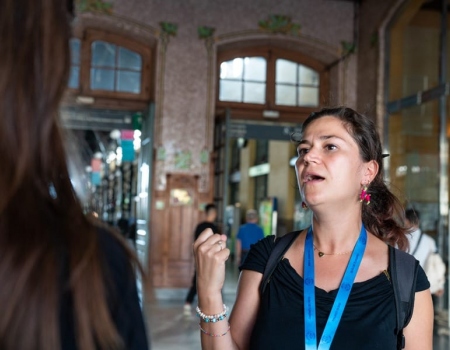 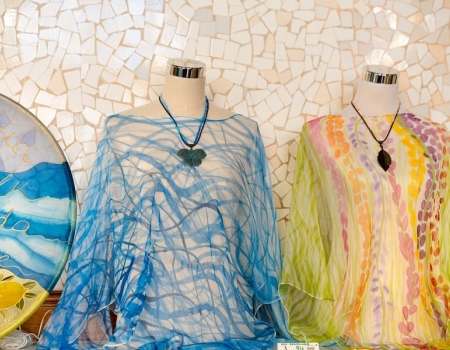 The hat and fan stores are traditional, family businesses that make products on-site to ship across Spain. Sombreros Albero sells every type of hat you could imagine, winter hats, summer hats, heat-resistant hats, and so on. They even had hats to fit my big noggin. Hats here are probably too expensive for a spur-of-the-moment purchase, but if you’re after a fancy new hat, you’ll definitely find it here.

At Abanicos Carbonell, owner, Paula, showed us how to spot the difference between quality, authentic Spanish fans and cheaper, easily-breakable knock-off fans made in China. Apparently 99% of fans sold as Spanish souvenirs are made in China, even the ones with ‘made in Spain’ labels. We marvelled at the intricate designs hand-painted by Paula and her family which start at €10, but most range between €25-40. 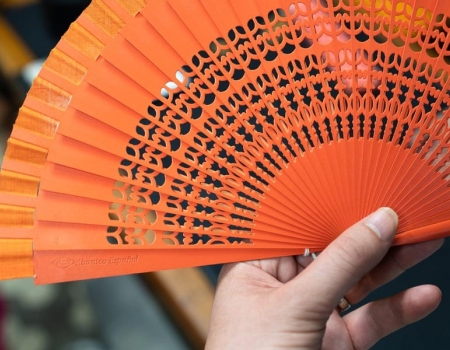 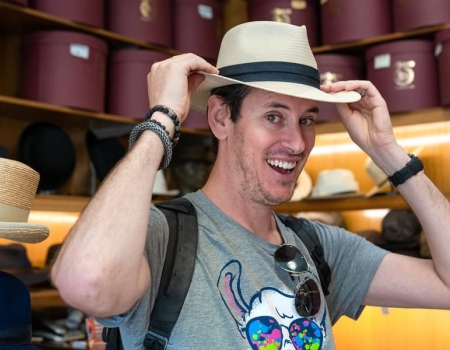 Chocoholics will adore Trufas Martinez, a small chocolate factory selling truffles, hand-painted chocolate masterpieces, and even dairy-free chocolate. We got to try wafer-thin chocolates oddly paired with oil and croutons. I was surprised by how delicious the combination was! Owner, Theresa, shared tips on how to taste good quality chocolate: put it in your mouth, close your eyes, and let it melt to catch all of the flavours. Yum! 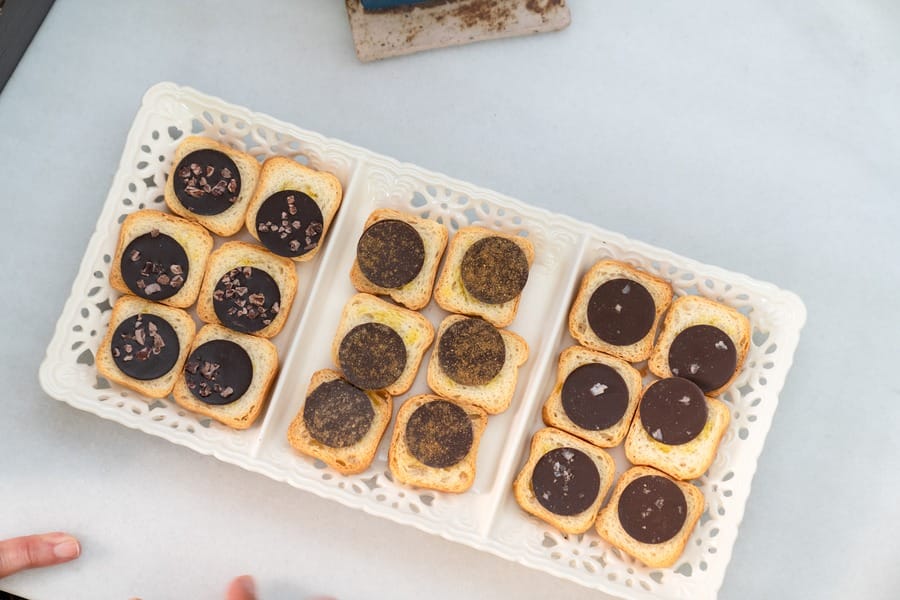 There’s no obligation or pressure to buy at any of the stores visited, the goal is to learn about authentic Spanish products made in Valencia.

My favourite Valencia private tour involved driving through the country side to sample wine on an 8-hour wine tour with local guide, Johan.

Johan picked us up from our Airbnb apartment and drove 1-hour to the Requena-Utiel wine region. Along the way, he explained the history of winemaking in Spain, sharing an important story from the 1800s when French vineyards were attacked by a bug resulting in a boom in demand for Valencian wine. Winemakers in Requena-Utiel used Moorish caves under their homes to produce and store vast quantities.

Our first stop was one such “wine cave” in sleepy village, Requena. We visited the storefront of large vineyard Murviedro 1927 and descended underground to tour the wine cave, seeing stone channels once used to transport wine and giant clay pots used for storage and transportation. We then sampled two wines, a white muscat with a sweet aroma and dry finish, and a red bobal, the most common grape variety in Valencia.

Next, we visited smaller winery, Vera Estenas, where Johan walked us through the vineyard, pointing out different varieties of grapes before taking us through the factory, some of which dates back to 1876, to explain production methods. Our tour finished with a tasting of two wines, a white la tartana meaning “the late one” because of its late harvest, and a bobal rosé. The rare la tartana is my new favourite Spanish wine. 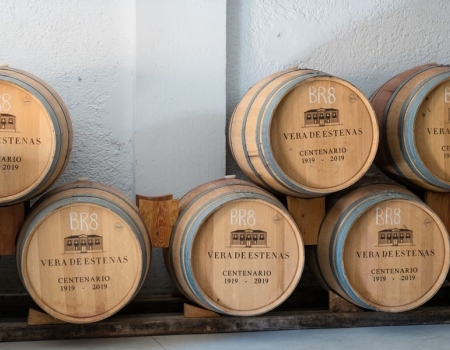 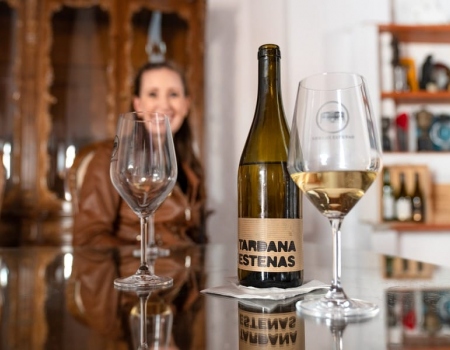 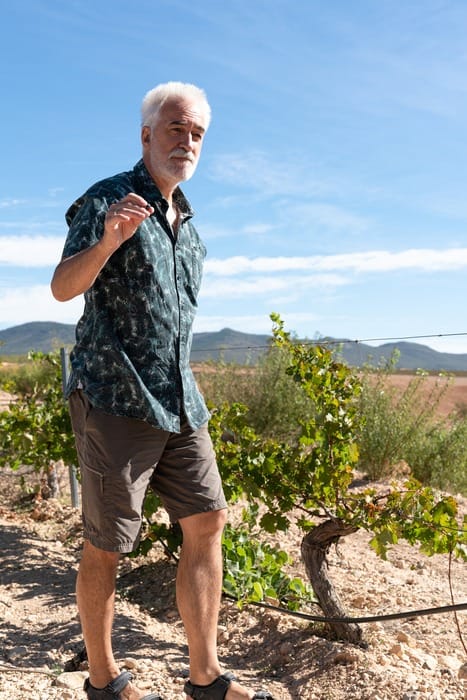 In the vineyard with Johan

After all that wine, we needed to fill our stomachs so stopped at El Vegano for a 3-course lunch and of course, another glass of wine.

5. Route of the Holy Grail Tour

If you’ve ever seen The Da Vinci Code or Indiana Jones and the Last Crusade, you’ve probably heard a bit about the Holy Grail, but did you know it’s actually in Valencia? I booked a 2.5-hour Route of the Holy Grail and Religious Art walking tour to see the Holy Grail (The chalice Jesus supposedly drunk from during the last supper) and the city’s other religious relics and art.

The tour visited 3 churches, the highlight being the Valencia Cathedral, home to the Vatican-approved Holy Grail. According to our guide, Raquel, archaeologists have verified the chalice as being from the time period of the last supper and cannot prove it isn’t the very chalice Jesus drank from. The original chalice is quite humble, with decorative gold and jewels later added to the stem and base. The grail isn’t the only relic housed within Valencia Cathedral. Raquel gave us a short tour of the cathedral, stopping to point out notable chapels, artwork, and the un-decomposed arm of St Vincent the Martyr, the patron saint of Valencia. Yep, a dead guy’s arm in a glass box. 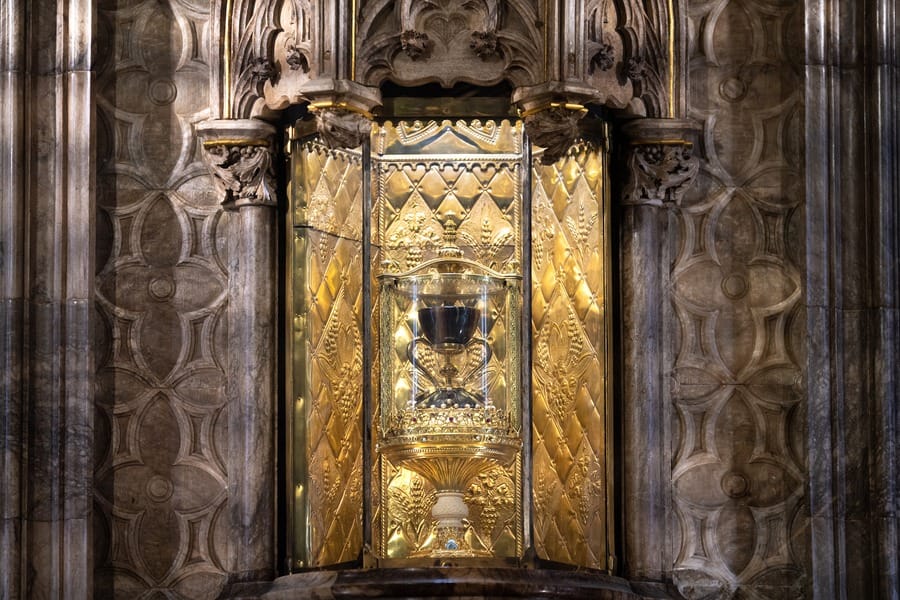 The Holy Grail protected behind 3 layers of glass – no sipping today!

We also visited Valencia’s oldest church, San Juan del Hospital Church, where Raquel explained the allocation of land to church sects, like the Templars, after the crusades; and the Church of Saint Nicholas, where we marvelled at intricate ceiling paintings depicting the lives of Saint Vincent and Saint Nicholas (yes, that’s the same Saint Nick we know as Santa Claus!). 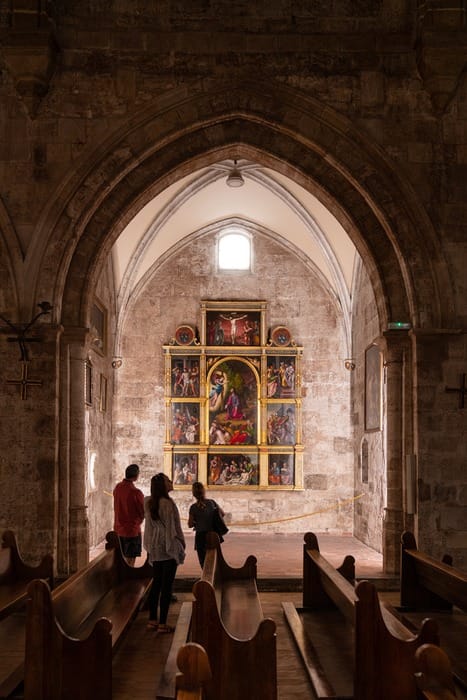 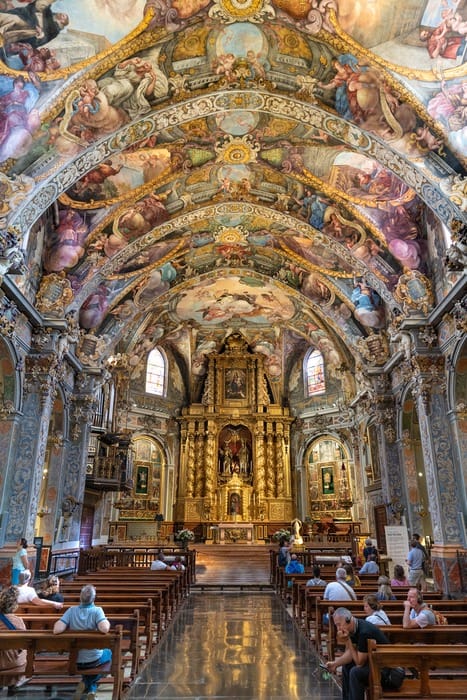 In Valencia, the 15th century is known as “the golden century” as the city’s economy thrived thanks to its flourishing silk industry. To learn more about Valencia’s golden century, I booked 2.5-hour City of Silk walking tour.

We first visited La Lonja de la Seda to see the building where all deals and transactions, some relating to silk, took place. According to our guide, it was the Wall Street of the 15th century. Everyone looking to trade in Valencia would have come through this building, and they would have been met with a magnificent display of wealth when they did. The main hall is filled with detailed twisted columns resembling palm trees, and the ceiling was once painted to echo the night sky. Even the basement, which was a prison, has an intricately designed ceiling.

Our guide shed insight into the significance of La Lonja, sharing stories that took place here, like Christopher Columbus’ meeting with traders to argue his case for a voyage to India.

Globalisation and mass tourism have made it possible to visit new countries and cities without really leaving our comfort zones. We can speak our own language, eat in familiar restaurant chains, and basically go about our lives as we would at home.

And that’s a damn crying shame.

I dare say, a crime. 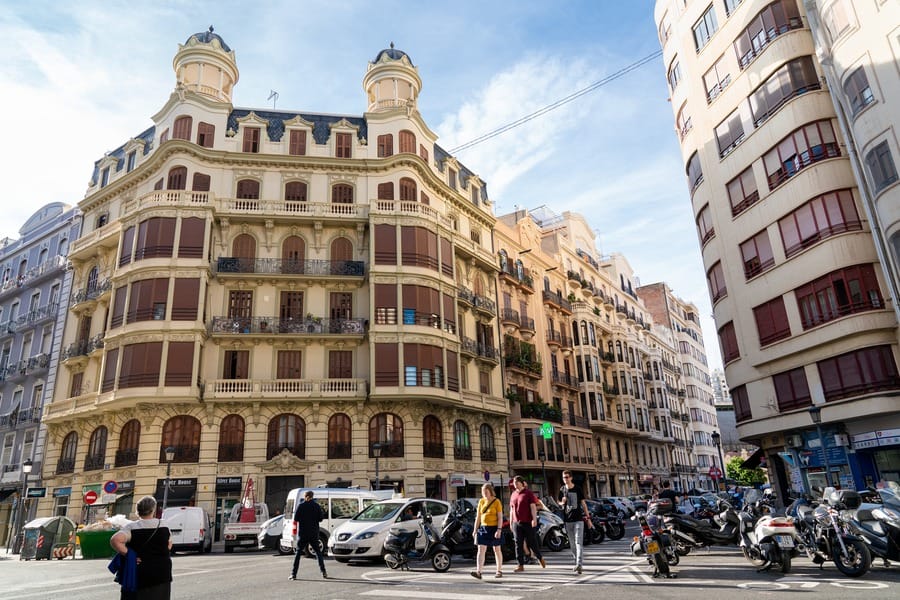 If you ask me, the best thing about visiting a new city is getting out of your comfort zone, trying new foods, getting immersed in a foreign culture, and learning something fascinating.

These 6 best tours in Valencia do just that.

But be warned, after you’ve had a sip from the Holy Grail, you might just live forever.

So, free up some space on your credit card for a new Valencian hat or fan. You might as well do immortality in style.

Get our latest blog posts delivered to your inbox each week jam-packed with expert travel advice:

Copyright 2021. All Rights reserved.
Made with by WPlook Themes