Looking for tips on the things to do in London?

As part of our city guides series, we interviewed Lucy Dodsworth who lived and worked in London for over ten years, and is now starting to get to know London as a visitor instead of as a resident.

Lucy shares with us her insider tips on the best things do in London including where to eat, sleep, drink, shop and explore.

London is a real world city – with some of the most famous buildings, museums and galleries in the world and 2000 years of history to go with them.

But it’s not just looking backwards, there’s always a new bar, play or concert to see.

London is also one of the most international cities, with people from all around the world making their home here, so it’s just as easy to get Indian street food as it is a roast dinner.

Yes, it might rain a lot and no people won’t smile on the Tube, but whatever you’re interested in – from museums to shopping, rock to opera, budget to luxury – there’s a London that will suit you.

Best Things to Do in London, UK

Get Your Guide has an incredible variety of tours, activities, tickets and passes with a list of handpicked tours and things to do in London.  Like this original Harry Potter Guided walking tour

Check out the London Pass and enjoy free entry to 60 of its world-class sites and take advantage of special offers at quality London restaurants and shops.

One of London’s early markets and the original marketplace still stands in the Piazza.

But today it’s one of the city’s main entertainment and shopping areas, with stalls selling crafts and gifts rather than fruit and veg, with street performers and musicians, surrounded by bars and restaurants.

The place to go for museums, with the Natural History Museum, Science Museum and V&A are all in easy reach of each other.

From here you can walk up to Hyde Park and Kensington Gardens, or window-shop at the seriously expensive shops in Knightsbridge.

It’s still home to the University of London, the British Museum and British Library, but was made famous by the Bloomsbury Group of 1930s intellectuals. You’ll find blue plaques on their former houses all around the area, along with garden squares and coffee shops.

Where to Eat in London

You can find food from almost any part of the world in London – like Bangladeshi in Brick Lane, Middle Eastern in Edgware Road and Caribbean in Brixton.

Street food has really taken off in London too, try Portobello Road Market and the Real Food Market on South Bank.

My favorite London food market though is Borough Market with over 70 different stalls selling produce from the UK and beyond and lots of tasting samples. While you’re there, don’t miss nearby Neal’s Yard Dairy for amazing cheeses.

You can’t visit London without eating

For a classic English tradition, it’s got to be afternoon tea.

Preferably with a glass of Champagne to go with your sandwiches, cakes and pastries, all served on an elegant cake stand with a pot of tea.

Some of the most well-known places for tea are The Ritz or Fortnum & Mason. But I love the afternoon tea at the Kensington Palace Orangery, in a light airy building in the park.

Where to Drink in London

Steer well clear of the overpriced touristy bars and clubs around the Leicester Square and Piccadilly Circus. If you’re looking for recommendations in a particular area, check out the review on the Time Out website.

Some of my favourites are the Booking Office and Champagne bars at St Pancras – a train station might not sound the most exciting place for a drink but the setting is beautiful.

Or for city views, perfect for a sunset cocktail, try Vertigo 42 in the city. And you can’t beat a cosy pub with a log fire in the winter, like The Flask in Highgate. 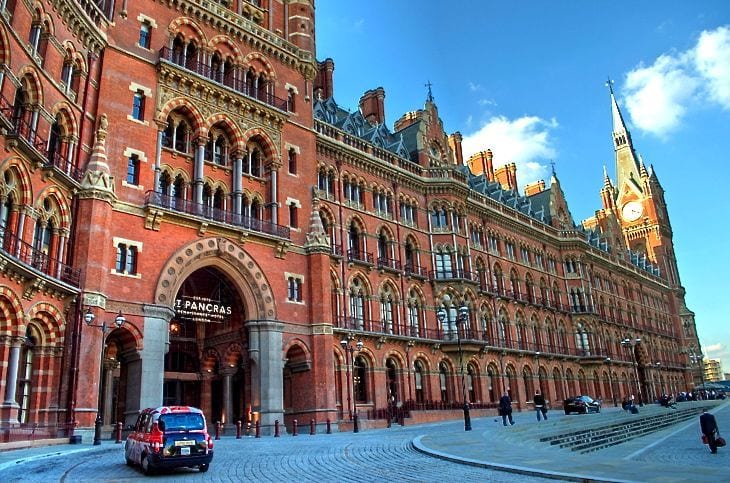 Best places for a night on the town in London

London’s West End has a huge choice of musicals and plays. For the best tickets either book in advance or try the tickets booth in Leicester Square on the day.

For cinema, small independent places like the Screen on the Green in Islington, Curzon Soho and Prince Charles offer a wide variety of independent and foreign language films.

For live music, check out Ronnie Scotts in Soho for jazz, the Barbican for classical, the O2 for big names, and the Camden and Dalston areas for up-and-coming bands.

Where to Stay in London

London’s not cheap, but you can find a few London budget accommodation options.

London has a wide range of markets.

Some of my favourites are Borough Market for food and drink, Portobello Road Market for antiques and fashion, Camden Market for vintage and alternative clothes, and the Colombia Road Flower Market.

Oxford Street is the city’s most famous shopping street, but it’s mostly full of chain stores and big department stores.

Also worth seeing is Harrods, though more for its completely over-the-top décor – especially at Christmas – than for actual shopping.

London has hundreds of festivals and events each year, so you can usually find something going on whenever you visit.

For old-school British events, there’s the Trooping of the Colour in June, a huge military parade to celebrate the Queen’s Official Birthday (she gets to have two, her real one is in April) and the Lord Mayor’s Show in November.

Other major events include firecrackers and fireworks in Chinatown for Chinese New Year, the Caribbean style Notting Hill Carnival in August, cheering the runners at the London Marathon in April, and getting a glimpse into some of London’s normally inaccessible buildings over Open House weekend in September.

Central London is fairly walkable, but the city sprawls out so you’ll need to use the Tube or bus. Get an Oyster card to save money on transport – you load it up with money and touch in and out on the bus or Tube.

Also, try the riverboat services along the Thames for a scenic view of the city. But watch out for line closures on the Tube at weekends and it closes every night around 1 am, so you’ll need to get a night bus or cab after that.

Free wifi access in London isn’t great but it’s getting better. There are free wireless hotspots in Islington and the City of London.

Otherwise, chain cafes like Pret a Manger, Starbucks and Coffee Republic give free wifi to customers, and there are a whole load of other independent places with wifi listed on the Time Out website.

London’s weather is always unpredictable and if it’s bad then there are plenty of things to do inside.

In the summer, you can spend time outside in the parks and at outdoor festivals and events.

But winter is a great time to visit too, with Christmas markets in Hyde Park and along South Bank, and outdoor ice rinks in the Tower of London and (my favorite for its beautiful setting) Somerset House.

Best side trip from London

In the summer, I’d head an hour south of London to Brighton to paddle on the pebbly beach, eat candy floss on the pier and check out the cool shops in the narrow streets of the Lanes.

Otherwise, I’d head west to Oxford to see the famous university colleges, visit some of the museums and try out punting on the river.

But watch out as although they’re described as ‘London’ airports they’re often way out of the city, so you’ll need to get a train or bus into central London.

There’s also the international Eurostar train service which runs from Paris and Brussels right into St Pancras Station in the centre of town.

To see the ‘real’ London, get out of the centre to some of the outer neighbourhoods. Each has their own totally different feel.

I love London because …

There’s always something going on and you can come back again and again and see a completely different city every time.

Plan Your Trip to London

BIO: Lucy is a UK-based editor and designer and part-time traveller. She started her blog On the Luce for people like her who want to make the most of their travel time as they combine their passion for travel with family, friends, work, love and everyday life. You can find out more about her travels on Twitter and Facebook.

Do you have any tips on things to do in London? Share in the comments.

Copyright 2021. All Rights reserved.
Made with by WPlook Themes